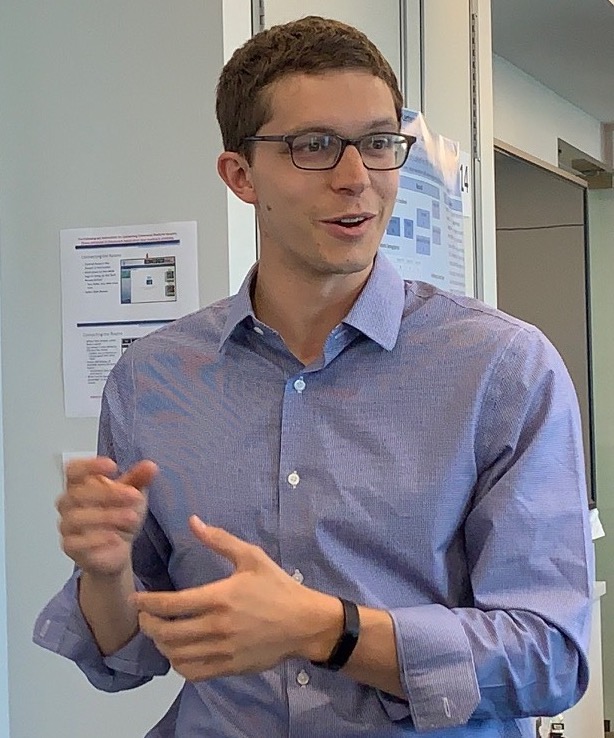 Scientist at Massachusetts General Hospital, Harvard Medical School, and the Broad Institute of MIT and Harvard. "Kenneth" only when taking myself too seriously.

Much of my scientific work is based on the concept of biological interactions, in which multiple factors (say, a genetic variant and some lifestyle behavior) synergistically affect a trait of interest (a risk factor for disease or the disease itself). This added complexity contributes to problems in biological and medical science, ranging from the “missing heritability” in genomics (why can’t our predictive models successfully account for the known heritability of many traits?) to the inconsistency of individual-specific responses in dietary trials. It also forms the basis for precision medicine by describing the ways that particular characteristics of an individual determine what behaviors, drugs, or environments will be most effective for them.

Most notably, I focus on gene-environment interactions (GxEs); here, the impact of a basic trait (e.g., biological sex), behavior (e.g., physical activity), or environmental exposure (e.g., pollution) on some outcome depends on one’s genetic makeup. We can also think about it as the exposure modifying the genetic effect on that outcome (this is equivalent from a statistical perspective!). 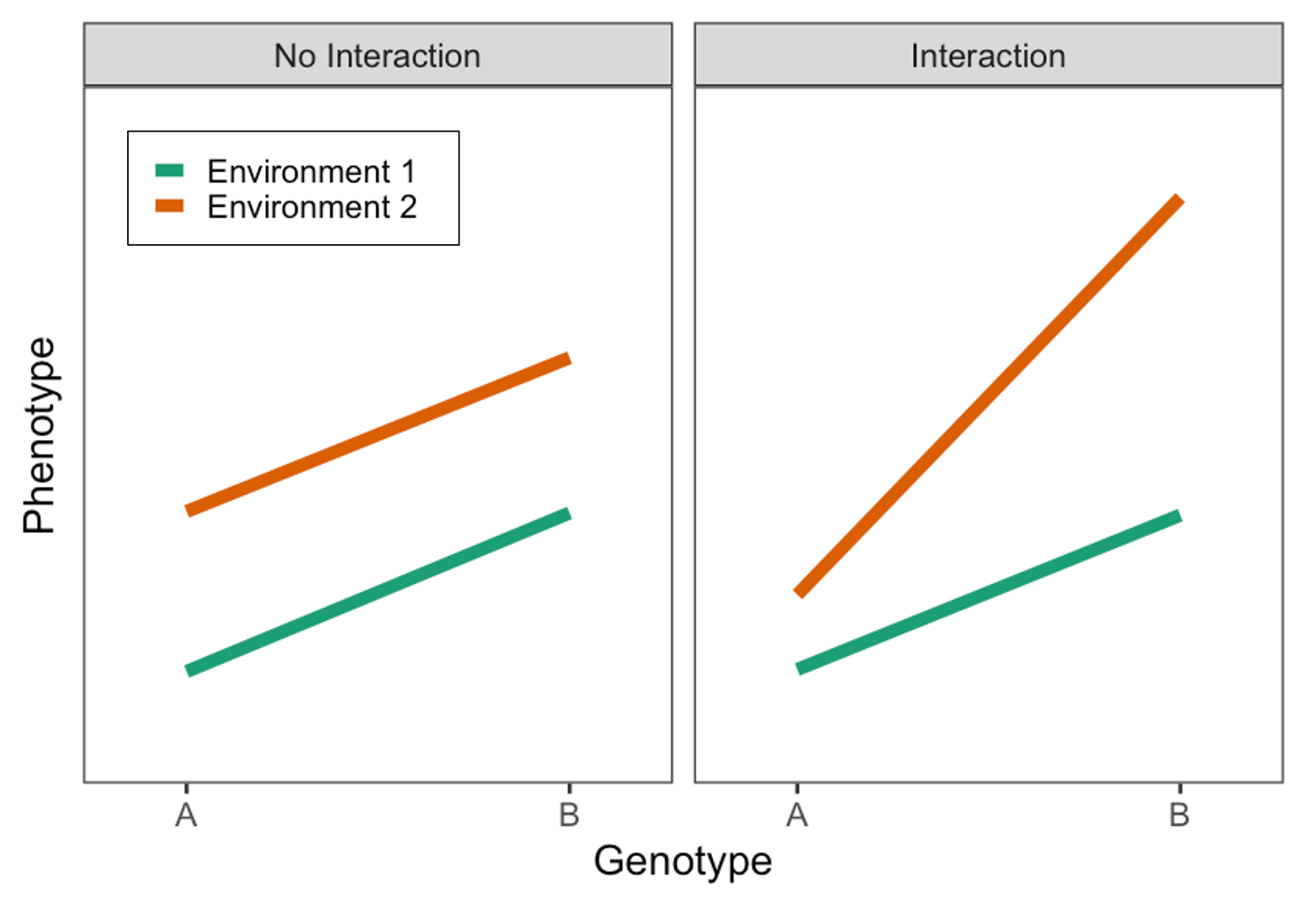 I’m grateful for the opportunity to work on some of these problems with experts in the GxE field, including Alisa Manning (my advisor at MGH) and Han Chen.

My GxE work falls into a few different domains:

Precision nutrition approaches to metabolic disease prevention will require a better understanding of the molecular factors governing inter-individual variability in diet response. To this end, my research has focused on examining how cardiometabolic risk factors are impacted by interactions between diet and molecular quantities, including genomics, epigenomics, and blood biomarkers. Using the Women’s Health Initiative Dietary Modification Trial dataset, I provided evidence that aggregation of thousands of genetic variants into a single “responder score” may predict the LDL-C response to dietary fat.

Two recent investigations have built on this by identifying gene-diet interactions impacting glycemic traits in larger study samples including the UK Biobank and TOPMed Consortium. One substantial challenge for studies like this is defining a dietary exposure that is both meaningful and measurable using data from dietary questionnaires. We took two different approaches to this problem in these studies: defining data-driven, food group-based dietary patterns and assessing macronutrient consumption (such as an exchange of fat and carbohydrate), respectively. Expanding beyond solely genetics, I collaborated with a colleague to conduct a pilot study that found an epigenetic signature of responders to vitamin K supplementation. 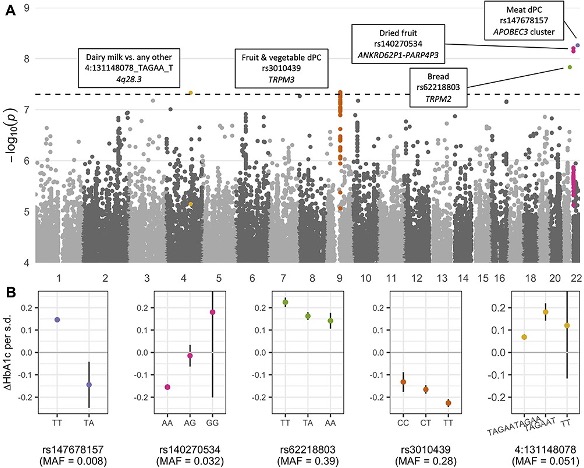 GxE identification provides a key foundation for genome-based precision medicine, but GxE analysis in increasingly larger samples carries statistical and computational challenges. I have made contributions towards overcoming these challenges in both methodology-focused and applied studies. I led the testing and publication of a tool, GEM, for more computationally efficient and statistically rigorous GxE testing, showing in the process that GEIs may be as common across the genome as genetic main effects.

Working closely with Joanne Cole, I have put this to work in conducting a novel “exposome-wide” GEI study in the UK Biobank that aims to systematically map interactions across many genetic variants, exposures, and metabolic biomarkers. Part of this effort involved searching across the genome for “variance-quantitative trait loci” (vQTLs), or genetic variants that associte with the variance (rather than the mean) of some trait, as a way to reduce the total amount of variants to be tested for GxE. The results from this project, including our catalog of vQTL and GxE summary statistics, are publicly available in a browser at the Common Metabolic Disease Knowledge Portal. 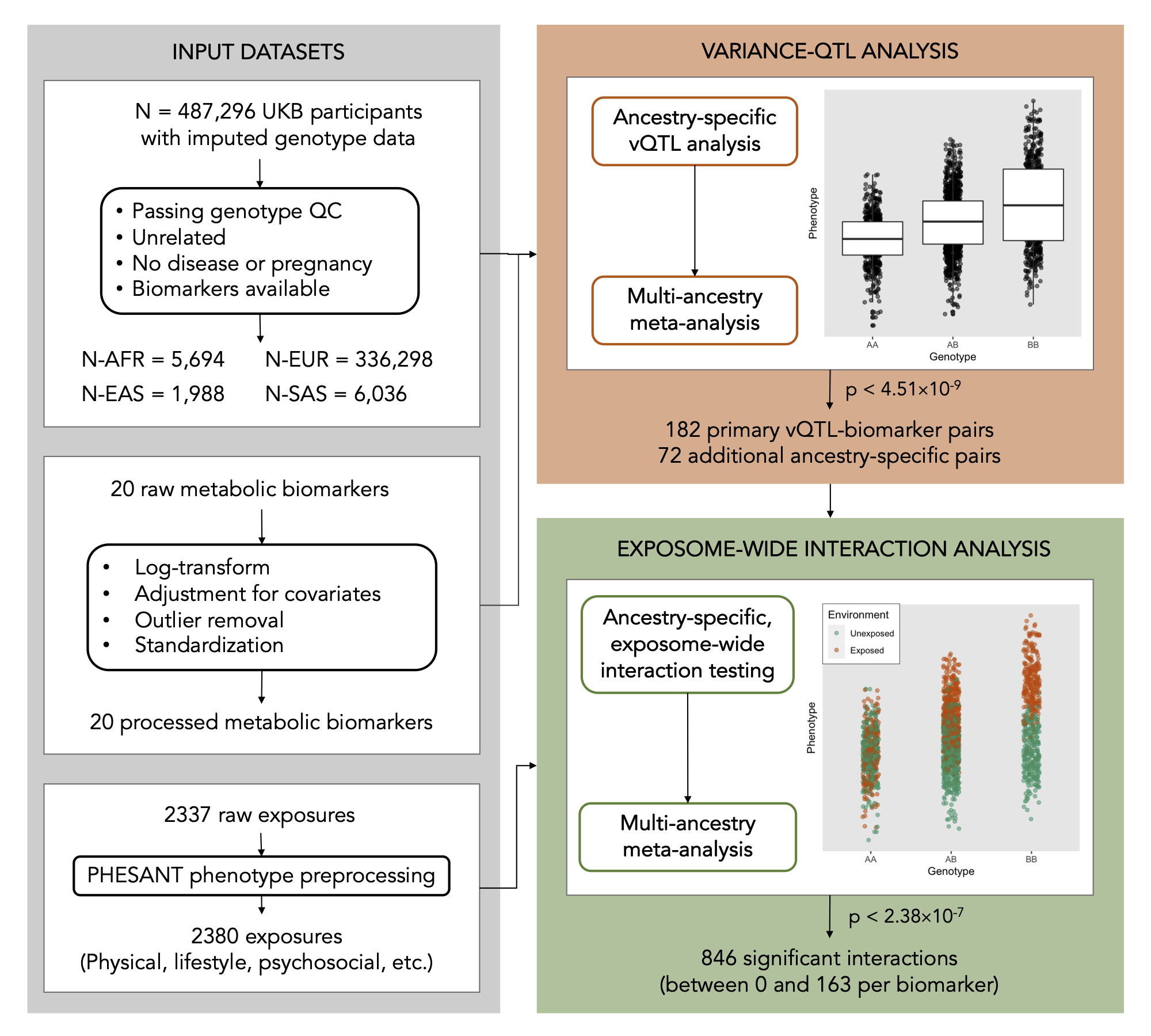 DNA methylation can integrate biological information from genetic variants and environmental inputs, and thus may act as a useful biomarker for cardiovascular disease. A series of investigations during my thesis work used bioinformatic approaches to explore connections between DNA methylation in blood cells and incident cardiovascular events in epidemiological cohorts. Beyond highlighting specific genes and pathways of interest, these studies provided important conceptual advances for the field of epigenetic epidemiology. Namely, we helped provide proof-of-concept for three ideas: (1) DNA methylation can act as a molecular readout of cumulative exposure to cardiovascular risk factors, (2) a methylation-based cardiovascular risk score may be differentially useful across strata of traditional or genetic risk, and (3) a recently introduced method for cross-study prediction of disease risk is viable in the novel context of cardiovascular epigenomics. 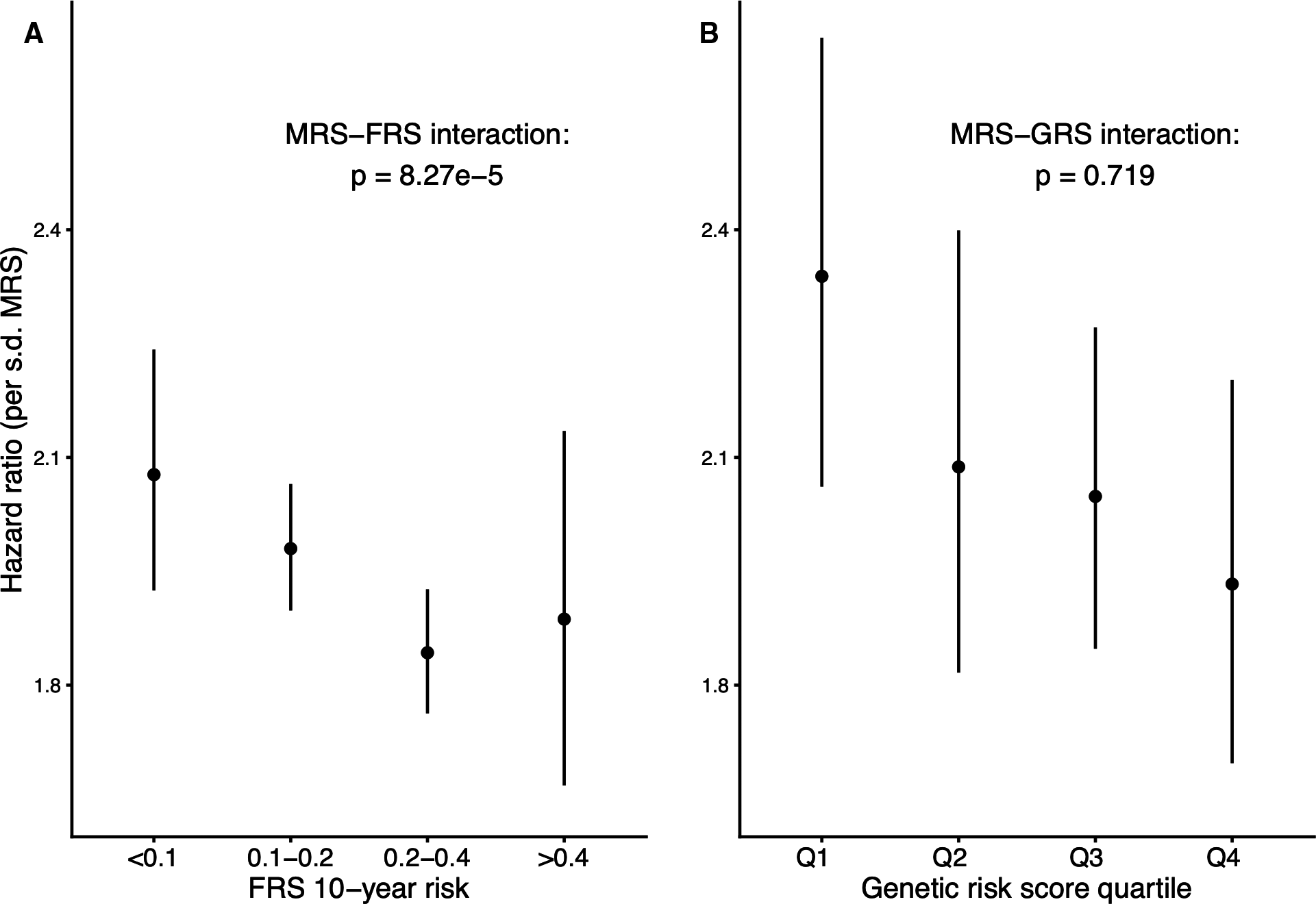 Contribution to the development of cloud computing platforms

Genomic science is increasingly migrating to cloud computing platforms for both scalability of computational resources and improved data security, but this migration process requires substantial infrastructure improvements. I have been fortunate to have opportunities to contribute to the development of these platforms. First, I have developed workflows (using Workflow Description Language) to conduct GxE tests with a variety of software tools in a way that is portable across different cloud platforms (e.g., Terra, DNAnexus, and NHLBI’s BioData Catalyst. Second, as a fellow in the BioData Catalyst Consortium, I led a monthly meeting with fellows and platform reps focused on workflow development (including their “accreditation”) and cloud analysis cost estimation.

Prior to beginning my thesis work, I explored a computational approach to predicting food compound bioactivity based on chemical similarity to drugs of known action. Since that point, I have worked with a small team to develop this idea and implement it as an open-source software tool called PhyteByte. This effort has not only prioritized food compounds of interest for specific phenotypes, but importantly helped translate established cheminformatics approaches from the pharmaceutical realm to the nutritional realm. We hope to expand this software by integrating better food compound databases and improved bioactivity prediction models (“Quantitative Structure-Activity Relationship” models). Great fun working with Sean Harrington and Larry Parnell on this project! 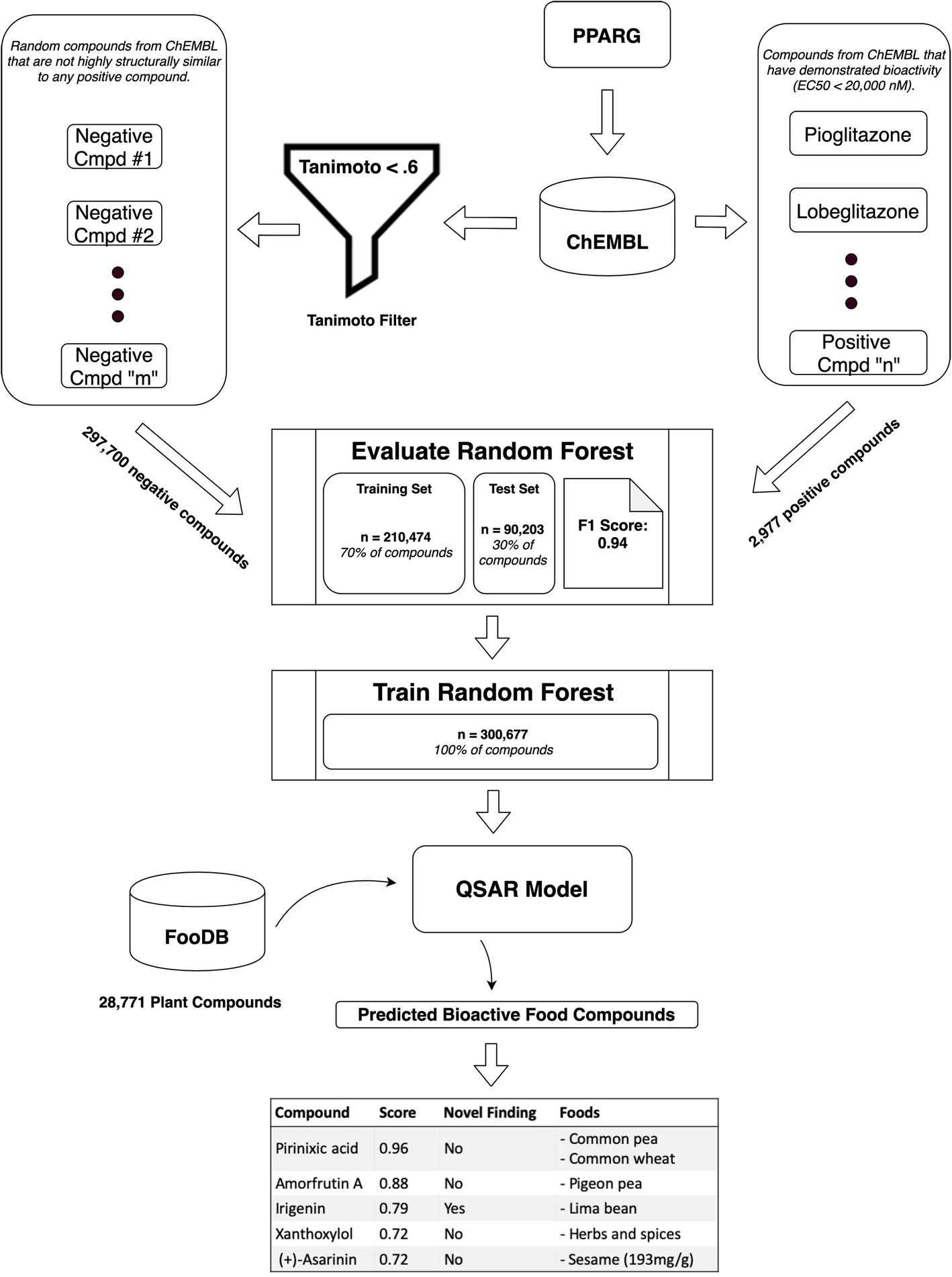 The sub-field of genetic clustering analysis aims to uncover disease subtypes based on genetic signatures of underlying disease-associated traits (“endophenotypes”). Miriam Udler has played a key role in pushing forward genetic clustering of type 2 diabetes using a Bayesian non-negative matrix factorization approach. I have helped generalize and partially automate the codebase for this clustering pipeline, which includes substantial preprocessing of genetic association summary statistics for these endophenotypes.